The simple light bulb is often used to symbolize the concept of an idea. Perhaps that comes from the notion of the light turning on as a metaphor for realization of a new idea in ones thinking. What a great idea!

Of course, the light bulb, or at least the process of its invention, symbolizes great success, and particularly after long failure. Thomas Edison believed it would be possible to create a device that produced illumination, light, from electrical current. He believed it could be accomplished simply by passing an electrical current through a filament suspended in a glass envelope containing a certain gas or vapor. People thought he was crazy.

So sure was Edison in his belief that he conducted trials and experiments for over a year and had over a thousand failed attempts before he produced a single working light bulb. And that first working prototype was so dim you would need a gas lamp to read by it! 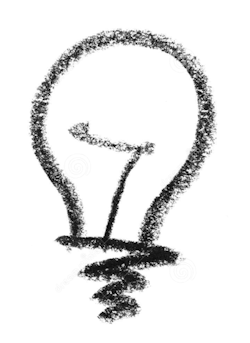 Is it perspective? State of mind? What is it that some people see and some don't? As they say, different strokes for different folks. And it not only applies to achieving success over failure. It applies across so many other things as well.

In our lives, in our businesses, as online professionals, a lot depends on our message. What we say. How we say it. How we get our ideas across to others. It is critically important to our success. What you think you are delivering, and what your audience is receiving, can be two entirely different things. Consider this simple crayon sketch...

Some people see a light bulb. Others see a fat lady bending over to pull up her girdle.

Steve's Success In A Year program isn't just thinking outside the box. It means having no box at all. Join me, and a select group of others, for a new perspective on your success.